Salvage of 'The Kursk'

In 2001 Huisman designed and delivered grippers for Mammoet to lift the Russian submarine 'The Kursk'. The grippers were used to make the essential connection to the submarine. The grippers fitted precisely in the vessel's structure and are equipped with a locking mechanism. Prior to the production of the grippers, a prototype was tested with a force of 2000mt. The grippers proved their accuracy and efficiency during the salvage operations: the Kursk was lifted successfully.

For SMIT Salvage Huisman delivered two hydraulic winches which were used to cut the hull of the wreck in sections after which the sections could be lifted and transported to shore. The Scaldis 'Rambiz' vessel with the Huisman designed and delivered 2 x 1,500mt cranes was used to lift the sections.

photos
/ tell us about your challenges
Contact your Sales Manager or our Sales Team
+31 88 070 2222 sales@huisman-nl.com
Increase product integrity 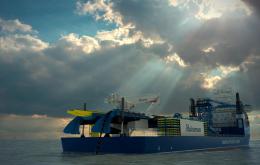