Early March, Huisman, the Dutch-based specialist in lifting, drilling and subsea solutions, successfully installed world’s largest Offshore Mast Crane onboard the “Seven Borealis” in four days only. This crane installation is  considered as the heaviest and logistically most complex conducted by Huisman to date. After final load testing, the “Seven Borealis” will depart for the Huisman production facility in Schiedam where a complete 600mt S-lay system will be finalised. 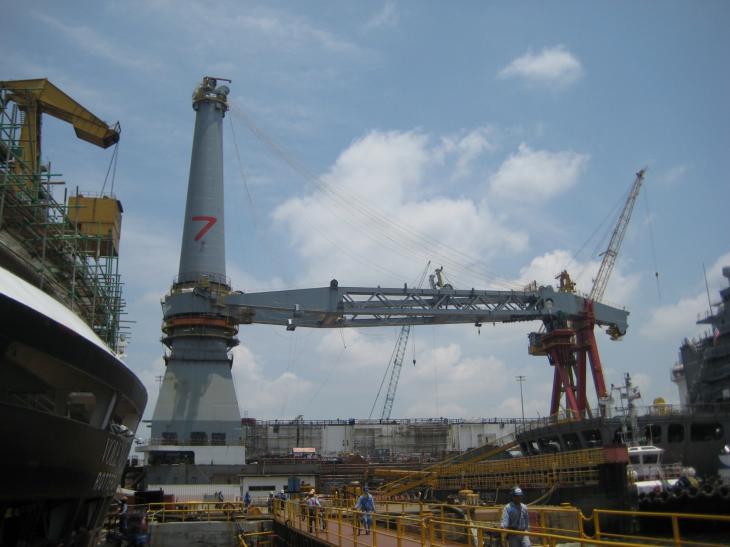 Transport and installation of the crane were performed under the responsibility of Huisman. The transport from the Huisman production facility in Zhangzhou, China to Sembawang Shipyard in Singapore was executed by BigLift’s “Happy Buccaneer”, a heavy lift cargo vessel with first generation Huisman Mast Cranes (1984). At Sembawang Shipyard the crane was installed onboard the “Seven Borealis” in four days, a lift of approximately 1000t each day. The four crane pieces were installed in the following sequence: mast base, slewing section, boom and mast. Currently the reeving and commissioning of the crane are ongoing.

The Huisman in-house developed and manufactured Mast Cranes are used within the industry for over 25 years and have become a standard in the design and construction of heavy lift cranes. However, every piece of this 5,000mt crane is massive. Besides the two 2,500mt main hoisting blocks the crane has a 1,200mt auxiliary hoist which is equipped with a heave compensator and is capable of storing up to 6,000m hoisting wire (109mm). The tip of the fly jib has an additional 110mt auxiliary hoist. This all is accompanied by four load tuggers and an additional five block tuggers. The installed electro motor power is approximately 15MW, hydraulically another 1.6MW. The slew bearing is custom designed and built by Huisman.

In the meantime, Huisman started the fabrication of a similar Mast Crane with a revolving lift capacity of 4,000mt which is planned for delivery in 2012.