On Thursday 16 June 2011, Huisman’s CEO Joop Roodenburg gave the official start signal for the construction of Huisman China’s new quayside which will be one of China’s most solid quaysides ever built. With the new quayside in place, the Huisman China facility will be easily accessible for seagoing vessels, allowing for fast installation, commissioning and testing of the Huisman designed and built offshore construction equipment onboard. Besides the installation of Huisman products, the new quay and 2,400mt Travelling Crane will also serve commercial purposes for companies throughout China. 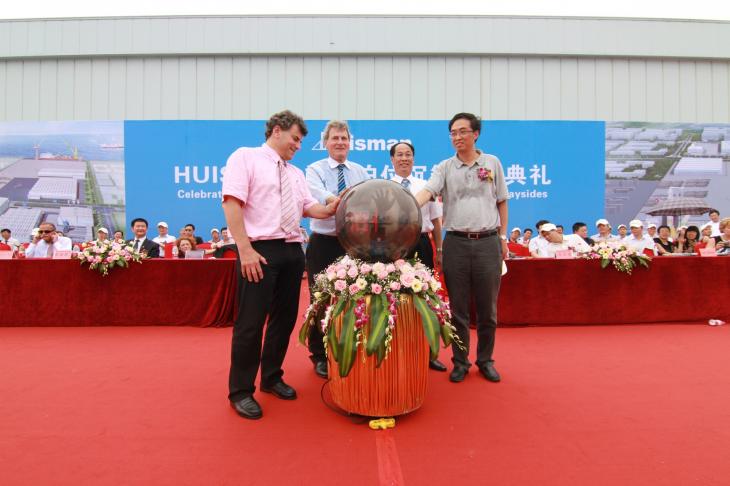 The 120 million USD investment includes a gravity quayside with a 380m long coastline. 25 caissons will be installed of which 20 have a weight of 5800 tons. The front edge of the quay will be equipped with a Traveler Crane with a capacity of 2400 tons, designed and built by Huisman. The new quayside is planned to be operational in January 2012. The entire project including infrastructure is planned to be finalized in June 2012.

Huisman, a specialist in heavy lifting, pipelay and drilling equipment already with production facilities in The Netherlands and the Czech Republic, expanded operations to Fujian (Xiamen area) in 2007. Huisman China is equipped with a total of 17 production halls – including a 205m long, 54m wide and 62m high hall -a shot blasting and painting hall and a maintenance facility which also accommodates a welding school. Besides a 90m stinger, Huisman China delivered over 25 cranes, including the recently built 5,000mt Offshore Mast Crane for the Seven Borealis.