Huisman, the worldwide specialist in lifting, drilling and subsea solutions, is about to deliver the first crane built and tested at their production facility in Navegantes, Santa Catarina state, in the south of Brazil. This 50mt (Deck) Knuckle Boom Crane is the first of an order of two 50mt (deck) Knuckle Boom Cranes for DOF/Technip’s ‘Skandi Olinda’ and ‘Skandi Recife’ which are currently being built at Brazilian shipyard VARD Promar. 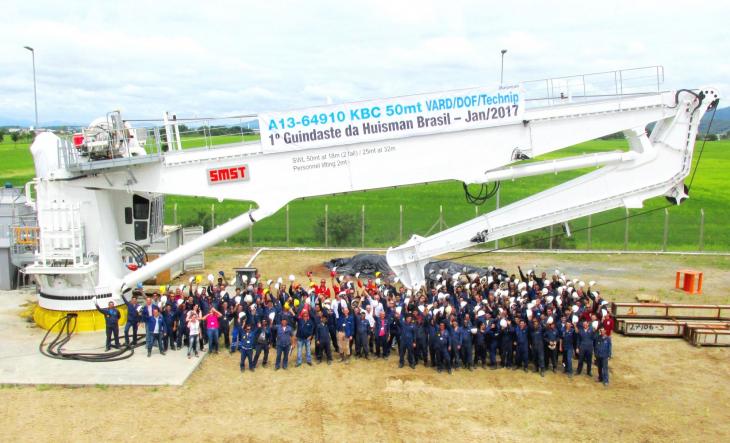 These 50mt cranes (by a SMST design) are completely manufactured and tested at Huisman Brazil. In addition to these two cranes, Huisman Brazil will deliver two 50mt Subsea Knuckle Boom Cranes and two 2,500mt flex-pipe storage baskets for the same DOF/Technip vessels, Huisman The Netherlands will deliver the two 340mt VLS pipelay systems.

Huisman Brazil was officially opened in April 2015 as the fourth Huisman production facility and is used for the manufacturing of offshore equipment for the Brazilian market. It is located along the Itajai-Açu river, enabling fast installation of Huisman equipment onboard sea going vessels. Last month, Huisman Brazil was awarded with a new order by Oceana Shipyard (part of CBO group) for the delivery of two additional anchor handling and towing winch packages for two new Havyard 843 AHTS vessels. These two winch packages are additional to the CBO order for four anchor handling and towing winch packages awarded in 2015. The first set of this order has been built in Huisman’s facility Brazil as well and delivered to CBO in November 2016.